Apprehension and excitement were my main emotions leading up to Toughest Midwest. As I volunteered that Saturday and started chatting with other Mudders and spectators, excitement took front seat.

Spending time with Cali, Jack, and Jamie, who shared a BNB with me and were also running the Toughest, helped temper the apprehension as well. Jack and Jamie both had completed Toughest Midlands a few weeks prior in the UK and were a great source of encouragement and advice.

Another source of encouragement occurred when I saw familiar faces on Saturday. I walked down to see who was at the start line and saw Sean Corvelle. My excitement at seeing him knew no bounds, because I wasn’t sure that he would be there due to his motorcycle accident. When I mentioned that fact after giving him a hug, he told me that there was nowhere else he’d rather be.

Even more encouragement came when I saw Jay Mazza running to get to the start line on Saturday morning; I yelled to him that I was running the Toughest that night. That made him turn around and run to give me a huge hug and a kiss on the cheek and tell me that he was proud of me.

And one of my favorite cheerleaders, JahLisa James showed up just in time for a photo before we hurried to the start line Saturday night. She always has a smile and a hug ready.

It was in those moments, and many other interactions that I had with fellow Mudders, that I realized that the people I’ve met over the past year are a HUGE part of what has given me the courage to actually try to do this.

Obviously, Saturday started bright and early with a volunteer shift. It was also cold, SO DAMN COLD. I ended up buying a sweater and socks from the merchandise tent and proceeded to start worrying that my gear wouldn’t be enough to get me through the race.

Thankfully, it started to warm up and my concerns were negated.

While Cali and I were volunteering, Jack and Jamie were running a full. We all finished at the site about mid afternoon, left to take naps and consume a good dinner.

The nap was probably the best thing for me because it stopped me from being able to worry and it made me relax. I woke to spaghetti and meat sauce, which I didn’t even have to cook! Who doesn’t love when someone else cooks for them?

After dinner, the final countdown began.

Last minute packing commenced and we were soon walking out the door and heading to the venue. 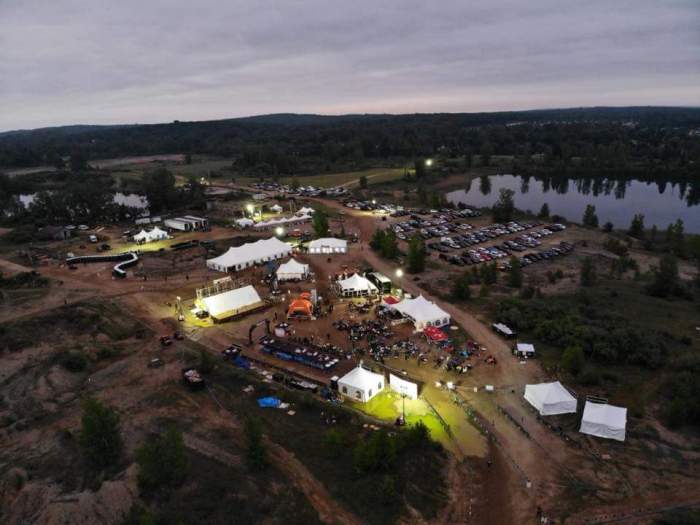 When we arrived it was a much different air than on a Saturday morning. We got checked in and walked into the tent where the guys, who had a much shorter check in line than Cali and I, had already staked claim on a table for the four of us. Jamie’s walking leg had a spot on the end to help us find our spot quickly during pits.

We started to unpack what we needed and set everything up. Grabbing some markers we had brought along, we wrote our names on the back of our bibs.

And in that moment, as I wrote ‘SMASHLEY‘ across the blank space of that bib, things became real. 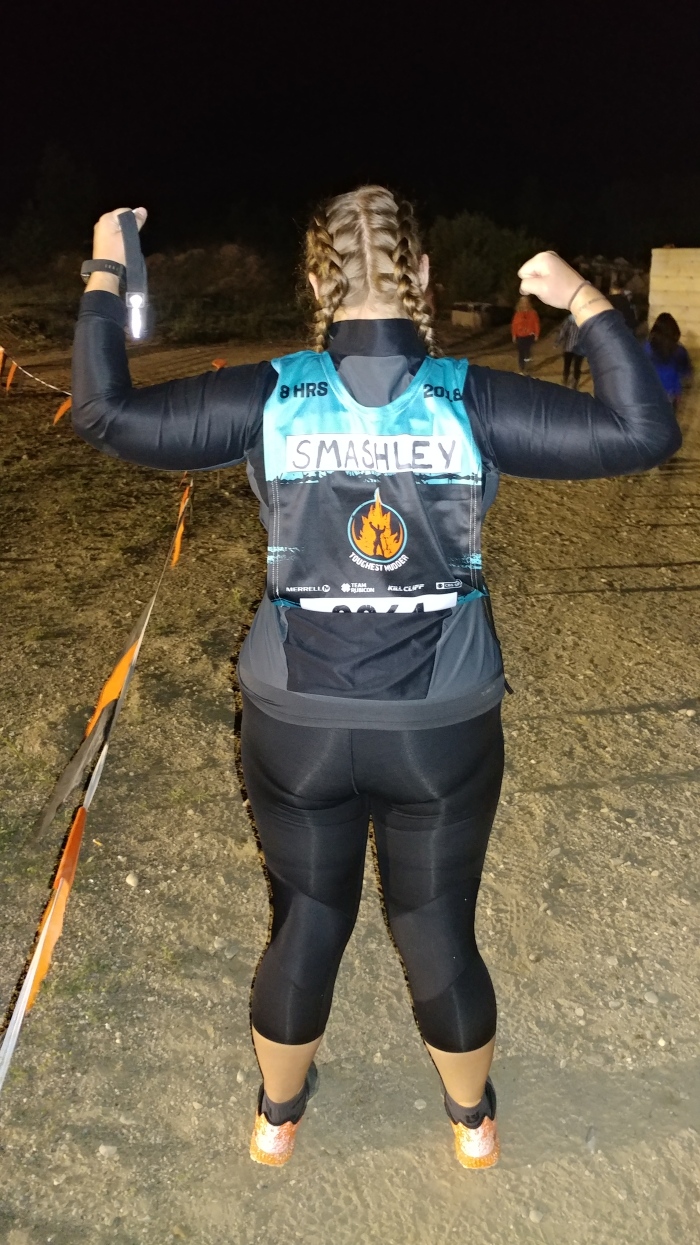 In less than two hours, I would be on that course.

Three words went through my mind: OH. MY. GOD.

The next bit of time was a blur. I know I went to the bathroom. I know I put on my wetsuit and my bib. I know that I got my hair braided and braided Cali’s hair. I know that I tied my rope to my headlamp and attached my glowstick to it as well.

I know these things because I had to do them to be ready, not because I really remember doing them.

Nearly 550 people dashed off into the night. It had started.

The first lap was pretty easy. Most of the obstacles weren’t yet open and who doesn’t love a good sprint lap?

Cliffhanger was intimidating when you saw it all lit up from the top of the previous hill. None of the pictures I have found posted since the event do it justice.

And that hill in the woods? The Equalizer is what I called it because that hill made everyone equal. Also, we all likely hated it equally.

Mud Mile 2.0 was simple. However, I almost fell into that deep one and I hit my shin on that ‘ledge’. I told myself that I wouldn’t do that next time.

Happy Ending was just that. Just seeing it in the distance made me perk up. I knew that the end was near and I got to see a good friend, Ashley, there.

Crossing that lap finish line was the best feeling ever. Even if I failed at everything from that moment forward, I had finished a lap. I was a Toughest Mudder. But there was still more work to be done.

We got to the pit from lap one at 1:38. I ate some food because I was already hungry. I took a picture of Cali and I to post as proof that we were still alive. It was a pretty short pit.

As we started on lap two, I saw Sean. He saw me and called out ‘I see you‘, which was encouraging because I wasn’t just another Mudder in that moment, I was seen and mattered.

Rope-a-Dope, better known as Rope-a-Nope, was another fun dip in the water. I almost couldn’t get out. A volunteer wanted to help and I had to explain to her that she couldn’t. Thankfully some other Mudders were waiting for a buddy to complete the obstacle and one of them was able to help me. I helped Cali and we went to take the penalty.

As we were walking back towards the course, a voice called out ‘Where are you coming from?’ I looked around and responded ‘Uh, the penalty’ and he was surprised that it was as long as it was.

Four tries on Everest and I still didn’t make it. I knew I was a bit gun-shy there because of my concussion a few weeks back in Texas. I took the penalty while Cali waited.

We trudged along, made it through obstacles but failed almost all of the ones with penalties, and we got to that DAMN hill in the woods again.

I hated that hill so much. However; the second time, which was still hard, seemed a bit easier.

Mud Mile 2.0 was still a freebie. The medical volunteer there, Ed, was a friend’s friend. He kept a smile on my face through it. I still almost fell into that deep one and hit my shin on that ‘ledge’ again. I told myself, again, that I wouldn’t do that on the next lap.

Cage Crawl made me happy because it was simple and relaxing. The jog to Happy Ending was quick and as we crawled out of the other side, we heard Jack’s name being announced and we waited for him as we walked into the pit at 4:11.

This pit was longer. We were all tired. Cali and I were two laps in, Jack was four. Jamie had made it in a bit before us but was already back out on the course.

I slipped on my windbreaker because I was getting cold and Cali did the same. Jack put on his Frogskin bottoms.

I took a picture and posted it to Facebook, updating everyone that we had survived another lap.

We were nearing on 30 minutes in the pit and I knew that we had to get back out there. If we stayed in much longer, we were likely not going to want to leave. We had goals to reach and it was time to MOVE, MOVE, MOVE!

Back on the course, Jack stayed with us for a while. Cali and I had mentioned maybe going for 20 miles and Jack was on board with that but so much was riding on how well we did on lap number 3.

Our pace was a bit slower than we hoped to maintain and it was not what we needed to reach 20 miles. Cali and I quickly realized that it wasn’t likely to happen but Jack wasn’t going to be deterred and kept encouraging us.

Eventually, Cali and I failed an obstacle and had to complete a long penalty. We were able to encourage Jack to go on and reach his own goal. We knew that he could hit Contender status if he was willing to leave us behind. He was able to reach it, crossing the finish line at 8:27 AM, with 30 miles under his belt!

A man came up on us and called out ‘Smashley and Silent P! Good job!’ His bib said ‘Bubbles’ and I had a good laugh at that.

Cali and I continued to trudge on. The wetsuit, which was undoubtedly saving me from the cold, was also causing my hip flexors and knees to have to work harder. Hours upon hours of moving was causing me to become more exhausted and to be in more pain.

Thankfully, the one thing that looks as good as the finish line had made an appearance: the sun was starting to rise.

The weird thing about being on course all night and having the sun start to come out: you don’t recognize a thing and have zero clue where you are. Everything looks different in the daylight.

Cliffhanger wasn’t as intimidating. The Equalizer looked smaller. I realized on our third time making our way up the Equalizer that Lindsay Webster was not equalized on it. One second she gave Cali and I a ‘good job girls’ and the next second she was at the top of it and gone.

I also finally talked to a guy, Allmond, who had passed us over and over again, and commented on that fact. He told us that he was currently in 4th. He ended up placing 5th. That was a neat little connection.

We came up on Mud Mile 2.0. I forgot about that deep spot again and fell into it, spectacularly. I had to laugh out loud when I finally stood up and a guy behind me called out ‘Really Smashley?’. I hit that ‘ledge’ for a third time.

We went through Cage Crawl and the end was so close. Bagpipes were playing and I was overwhelmed.

This was the end. We wouldn’t go out for another lap; it was too close to course cut-off.

We jogged the rest of the way to Happy Ending. Cali and I gave the biggest hug to Ashley.

We climbed up one last time and sat on the top for a second.

This was the final obstacle for us at Toughest Midwest. The finish line was right there.

We had done it.

Cali and I crossed the finish line at 7:18 in the morning with an official 15 miles.

I raised my arms in triumph.

It was done and all that was left to do was sleep.

4 thoughts on “My Night at Toughest Midwest”